Palmyrenes Limestone Head of (Priestess) Woman from Funerary Stele Circa 2nd century. Dimensions: 10.5" height; 9" wide'; 6" deep From a funerary stele, wearing a high cylindrical headdress with vertical grooves, her face with a broken authentic nose, withered receding down-turned chin and prominent ears, her arching brows sharply defined, the articulated eyes with the pupils and irises incised, drop earrings, and a dimple below the thin lips. On the edge of the Syrian desert, in the eastern periphery of the Roman empire, the ancient city of Palmyra stood as a gateway linking the Western world to the luxuries of the Orient. To the ancient denizens of this arid realm, Palmyra was known simply as the Bride of the Desert, and for centuries intrepid merchants passed through this oasis seeking relief from the merciless desert sun. The Hebrew Bible attributes the city to King Solomon, though ancient Mari records mention Palmyra from the second millennium BC. Under the mercurial reign of the Seleucids—the progeny of Alexander the Great—the city experienced the delights of Hellenic civilization, continued three hundred years later when in the first century AD Tiberius incorporated Syria into the Roman Empire. From the Romans the city passed to Byzantium before falling to the armies of Muhammad and being abandoned around 800 AD. In its heyday Palmyra was an elegant symbol of imperial grandeur juxtaposed against a harsh, primordial environment. Trade brought wealth, power, and splendor to this desert town, transforming Palmyra into a limestone metropolis that has bequeathed a rich and abundant source of archaeological remains reflecting the city’s long imperial history. Palmyrenes are renowned for their construction of colossal funerary monuments built both above and below the desert floor. Burial compartments were sealed with limestone slabs decorated with magnificent busts and steles in high relief and representing the soul of the deceased. This heroic stele is a superlative example of Palmyran artistry. The stele, proportionally life sized, exudes nobility with an imperious presence befitting a woman of high esteem. In life, the subject of this limestone head must have been a priestess, indicated by her tall, cylindrical headdress. As for what god or cult this cleric worshiped, the answer is unclear; however, given the statue’s Classical aesthetic, one can readily infer that she belonged to the Hellenic religious tradition. With her receding down turned chin and exquisite facial symmetry, the handsome priestess epitomizes the idealized proportions espoused by the Greeks. Yet unlike so many examples of expressionless Greek statues, fine details in this funerary stele allude to the subtleties of personality. The priestess’s arching, inquisitive brow crowns large, articulated intelligent eyes—thickly lidded and with irises incised. A dimple accents a set of thin lips expressing the charms of youth. Yet with her large ears, furrowed brow, and wrinkled eyes the sculptor makes no allusion that the priestess is anything but a woman of maturity—testifying to the wisdom in her penetrating gaze. Neither a death mask nor an aggrandized icon, this remarkable stele exists outside of time and place, capturing the spirit of the ancients through the idiosyncrasy of a flesh and blood human being. It is a work of tremendous character beguiling our imagination with a relatable sensibility alien in the ubiquitous statues of mythic gods and heroes. The subject of this bust existed not in the empyrean but in reality, provoking whoever beholds this artifact to wonder just who was the woman behind this imposing face? What was her name? How did she die? What were her qualities? While such questions are sadly unanswered, the profound strength and majesty of this extraordinary creation is ineffable and yet the answer to their quality is quite simple: genius. 10.5" height; 9" wide'; 6" deep. Fair condition. Provenance: Canadian Private Collection, 1980s. For:85,000 USD

Can add other assets

I WANT STATES or COUNTRIES:

Swap for Cities
:  All cities
Swap for Zip(s)
:  All zip codes

M.j.McKinley's other listings for trade. 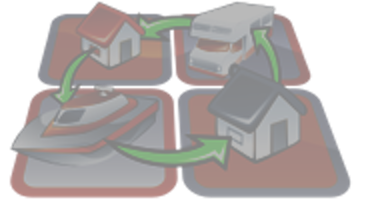